Back to Back CCs

With only eight shows having CCs in the show year - its interesting that by end of May we have seen 4 complete sets awarded, starting with Crufts then the FLC of GB.  Birmingham National and Scottish KC are back to back weekends.  We start with the National, where Jeff Luscott awarded CCs (he has judged the breed a number of times previously including Crufts 2004), here we were delighted when Matkamies won his 4th CC, its always nice to get the extra one, and if that was not enough Kia, his sister won the res CC, so a lovely day.  Then a week later we headed to Scotland to the Ingleston showground, where Carol Stuckey (Honeybears) a breed specialist was our judge.  The weather for the weekend was set fair and it was delightful to see the show ground bathed in sun instead of normal rain.  From entry of 23 dogs she awarded a 5th CC to Matkamies, and then to make it a truly special day for Sue & myself Kia was awarded the bitch CC, giving her her magical 3rd CC, to become the first UK bitch champion (and only the second Champion).  This was the second time that Matka and Kia have done the double with CCs on offer, (the first being the National last year under Sue Dunger when they won their first CCs). 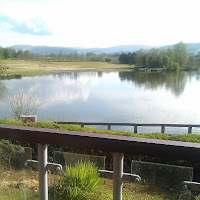 In the group under Mr C Reed, Matka made the shortlist which was the  icing on the cake. As we had had such an amazing day and we were late finishing at the show, we decided not to attempt to drive home (7 hours plus), but to find a nice hotel on route and celebrate with a glass or two.  So getting the important things sorted first - we stopped just outside Ingleston to fill car up with diesel and buy the essential bottle of wine, and then pointed car south to find a hotel.

We were very fortunate to find a hotel about hour south of show with an amazing view and lakeside walk, the dogs had a lovely run, and enjoyed sitting on the balcony to watch the wild birds.  A terrific weekend that I shall not forget in a hurry.