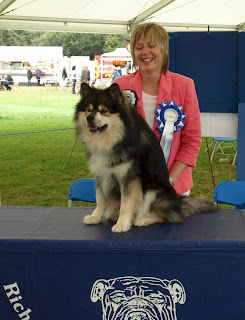 Have to say it was such an amazing weekend I am worried I will wake up to find it was all a dream....  Richmond Ch show saw the breed have its last Challenge Certificate of the year on offer - a single CC for the BOB only to be awarded by Mrs Zena Andrews - who is Patron of the FLC of GB club and has judged the breed regularly since it was in the Imported Register classes.  E Matkamies was the only Finnish Lapphund this year to have won two CCs already (City of Birmingham - Sue Dunger and SKC - Julie Vaughan), so everything was crossed.  But with an entry of 56 and many of the other CC winners of the year present it was not going to be easy.  But am so pleased to say that he did it!!!! he won his third CC, and therefore subject to the Kennel Club's confirmation he becomes the first UK Champion Finnish Lapphund.  If that was not enough, E Mikko SHCM was reserve Best Dog and Elbereth Penikka was reserve best bitch.


Then the weekend ended with some new arrivals, check out the next blog post for their introduction.
Posted by Toni Jackson at 23:09

It was a special day, congrats again to you and your lovely boy.