Ok so most of you know I am a little unhinged - but think this proves it. As many will know I have been arranging with Jukka Kuusisto to ‘borrow’ Multi Ch Lecibsin Macce for a while and these things are never easy, but this is a tale and a half. Macce has been ‘holidaying’ in Denmark with Sarah Brandes (Lapinlumon) and with Sarah he has won his Swedish, Norwegian, Danish and Nordic title, with numerous Group and BIS placings. Whilst in Denmark he was sitting out his qualification period for the Pet Passport – and this became valid as Christmas approached. It suited Sarah & me to get Christmas festivities over before planning on flying him to UK, but we had not bargained for the Scandinavian Airlines being unavailable for most of the time over the holidays, nor for them saying they needed 4 days notice to fly him to UK. Normally this would not have been a problem – but the bitch I had planned to mate with Macce decide to come in season making it imperative that he was here as the 2009 year started. Numerous calls and emails to Sarah and Scandinavian Airlines confirmed that flying was not going to get him here in time, so only option was to drive to get him.

It’s a long way to Denmark, so Sarah kindly agreed to meet me in Germany, and on the Tuesday 30th I spent best part of the day on the internet planning routes, booking a hotel and ferry crossing (no space on Channel Tunnel trains). So on New Year’s eve as everyone was planning to party – I set off with flask of hot coffee, numerous caffeine drinks, fruit and a cheese sandwich plus the classic junk food to keep one revived, leaving home at 9.00am to catch the midday ferry from Dover. Drive down to Dover was good, luckily for me most people were still off from work, so M25/M26/M20 was quiet!

The two hour ferry crossing gave me a chance to have a proper meal before the long drive to Bremen, in North Germany – I drove through France, Belgium, Holland and then drove into a cold (-6C) wintry Germany, light snow in places on fields and some freezing fog through forests. I arrived at my prebooked hotel at about 21.30 with some 500 miles on the clock. The hotel 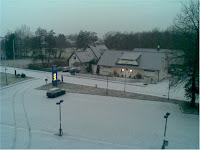 receptionist was most bemused by single person checking into single room for New Years Eve with only basic luggage. A quick call to Sarah to confirm I was on schedule and to ask her to chose suitable rendezvous half way between her in Denmark and me in Germany, which would require a 2 hour drive for each of us. Then to get my head down for a much needed sleep as I was not yet half way through the trip. Sarah texted me the rendezvous address, and I plugged this into good old Sat Nav and headed off for a mere 120 mile trip to Rendsburg, hoping that the slight covering of snow which had fallen would not give us too much trouble.


Amazingly we arrived with only about 10 mins difference in our times, and in spite of the difficult driving conditions and icy roads. A chance to exercise Macce and check up on his foibles with Sarah, before leaving at midday for the long long long drive home.

Macce and I stopped many times on route, we are experts on Service stations in Germany, Holland Belgium and France, Macce leaving a mark on many trees:) and me having to wash down the car windows many times as the salt and spray being thrown up as we drove made visibility tough at times. Amazingly my guestimate of leaving Western Europe by 22.00 was bang on, and we checked into the ferry at 20.40, in time to have Macce’s passport checked and stretch his legs one last time before the 2 hour ferry trip. Whilst Macce curled up asleep in the car – with some supper (thanks Sarah for thinking of sending some of his food), I had my second proper meal of the trip - on board ferry catering not fabulous, but filled a needy hole! We landed in Dover at 23.00 UK time and cleared customs to return home. I reached home at about 01.00 on the 2nd Jan, some 1250 miles covered!!!! Macce said hi to the girls and settled down for the night. 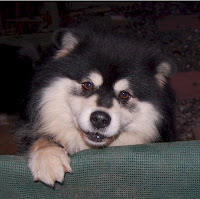 He is a really fun guy and is already playing with Satu and Diesel, Diesel flirts terribly with him, forgetting she is nearly 10 years old. He has met his new English bride, and was very happy to make my trip well worthwhile!!!! A special thanks to Jukka for letting Macce follow in Hapmi’s footsteps and even bigger thanks to Sarah for giving up her New Year’s holiday to help me on my crazy venture.

When I finally got myself to bed and shut my eyes, could you believe it I could still see roads unfurling before me - like those arcade games. Even now I still feel as if I am moving!!!
Posted by Toni Jackson at 18:21

What a pretty boy he is. Can't wait to see little mini-Macces running around :-)

Hi Toni
Well I thought I was mad!!! Think you have beaten me with this one..
Good enough story to make a film out of!
Glad he's settled in well.
Sue

What a handsome boy he is, I'm sure that long and crazy journey will have been worthwhile.